Wildlife sculptures in certified tropical hardwood from Interholco are among winners of a UK competition designed to raise awareness of the importance of sustainable forest management and its role in climate change mitigation.

The competition, Conversations about climate change, was run by the UK Timber Trade Federation (TTF). It formed part of its government-funded campaign to highlight the environmental, economic and social impacts of the UK and EU Forest Law Enforcement, Governance and Trade initiative (FLEGT). Designers were invited to create pieces in timber from supplier countries engaged in FLEGT Voluntary Partnership Agreements (VPAs). Their objective was to inspire conversations about the wide-ranging importance of the forest as a source of livelihoods and biodiversity and, in particular, due to its role in climate regulation. “People respond to objects and design at a different level than to words on a screen or piece of paper,” said TTF FLEGT Communications Executive Lucy Bedry. “Our aim was to use that to help convey the FLEGT story.”

The competition clearly struck a chord among designers, attracting over 100 entries from around the world. “We were thrilled with how far the message reached and the response,” said Ms Bedry. “We had entries from across Europe, South America, Asia, Africa and Australasia.“ The miniature wildlife sculptures, called Forest Dwellers, were designed by architect Tom Wilson and comprise a chimpanzee, gorilla, bongo antelope and forest elephant. He used FSC-certified utile, sapele and iroko, all sourced from Interholco’s Republic of the Congo operations via Danzer UK. They were among six winners selected by the judges, who were drawn from the timber trade, construction, design, architecture and retail. Wilson had previously ‘steered clear’ of using tropical timber, but was impressed with what he’d learned about FLEGT through the competition, notably its ‘governmental level and holistic approach to sustainability, both environmental and economic’. “I would now perhaps consider the use of tropical timbers more, provided I could be sure of the provenance and legality of the supply chain,” he said.

The competition winners are all on display in an exhibition at the London Building Centre, which runs until April 23. Due to pandemic lockdown, this has initially had to be online, but it’s hoped that restrictions will be relaxed in time to allow visitors to see it in reality. The goal is also to tour the exhibition in Europe in association with other national timber trade federations. TTF Chief Executive David Hopkins said the competition successfully communicated the core value of the forest and the role sustainable forest management and timber production plays in preserving it. “Tropical forests are often taken advantage of, and forest land is cleared for other uses,” he said. “That is where responsible forest management and timber sourcing become an essential part of the solution; incentivizing forest maintenance to prevent habitat loss and reduce harmful carbon emissions.”

Such was the popularity of the competition that the TTF is planning a second, with the winners’ exhibition timed to coincide with the COP26 UN climate change conference in Glasgow in November. It is also hoping to construct a timber pavilion in the city at the same time, attended by representatives of FLEGT VPA countries, to highlight the value of a sustainable timber industry, the forest and wood use in climate change mitigation. 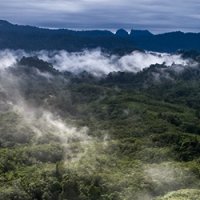