A report from global forest monitoring network ForestPlots.net concludes that intact tropical forests have been surprisingly resilient to man-made climate change. However, it says, ‘many are now reaching the limits of their tolerance to global heating and drying’.

The report, ‘Taking the pulse of earth’s tropical forests using networks of highly distributed forest plots’, draws on the work of ForestPlot.net’s 2,500 affiliate researchers worldwide who operate in international, national and regional groupings. In total the organisation, which is coordinated from Leeds University in the UK, integrates 24 such networks, monitoring 5,138 plots in 59 countries.

It says these networks, such as RAINFOR in South America, AfriTRON in Africa and T-Forces in Asia, have the ‘power to transform tropical forest science and build understanding of tropical forests and their biospheric role’. “Together we have discovered, how, where and why forest carbon and biodiversity are responding to climate change and how they feedback on it,” it states. “This long-term pan-tropical collaboration has revealed a large, long-term carbon sink [in tropical forest] and its trends, as well as making clear which forest processes are affected and the likely future responses of forests as the climate continues to change.”

Variations across continents
The report looks at monitoring network research into the connection between carbon storage and biodiversity in terms of tree species mix. This has found significant variations across continents. It has concluded that South America’s forests are richest in terms of biodiversity, but store least carbon per hectare. Findings also suggest strong carbon-biodiversity relationships are found only in disturbed and secondary forests, but not old-growth. African forests have been found to have most biomass, while in terms of carbon gains, Borneo’s forests are twice as productive as any other.
From this ForestPlots.net concludes that:
• Global-scale ecological modelling must take biological composition into account;
• Each continent needs its own forest research and monitoring programme;
• Each region likely responds to climate change in its own, individual way.

ForestPlots.net ground measurements show the global tropical forests sequestered over one billion tonnes of carbon annually through the 1990s and 2000s – ‘sufficient to significantly slow climate change’. But its research also reveals the impacts that global warming and other human activity are having on forest health, diversity and carbon sink capacity.

“Looking forward, key uncertainties that remain concern the responses [to global warming] of tropical biodiversity itself,” concludes ForestPlots.net. “This includes the extent to which the great biocomplexity of tropical forests – the most diverse, productive ecosystems on Earth – will provide an effective insurance policy in the face of rapidly changing climates. To understand this, forest monitoring must continue.” 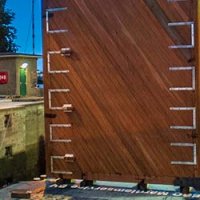