Members of the STTC Technical Committee report the Covid-19 pandemic resulting in radically reduced timber trading across Europe. Many companies are temporarily closing or curtailing operations, pushing back orders and asking for longer payment terms. Impacts of the health crisis are also reported from China and African supplier countries.

The STTC Technical Committee, which comprises the European Timber Trade Federation, national trade associations, the FSC, PEFC and ATIBT, held a remote meeting to address the crisis and share experience.

The UK TTF said it was busy with member enquiries, particularly on government grants to enable companies to pay furloughed personnel during temporary shutdown. Some importers, distributors and merchants have suspended business. Others are operating at much reduced levels. Some demand continues from the UK building sector, with work on construction sites allowed within new health and safety rules. DIY sales are also holding up, which is attributed to consumers undertaking repair and refurbishment projects while off work. Importers say they have asked overseas suppliers to push back orders by 30 to 60 days but there is still concern about the build-up of landed stocks at ports, with companies unable to accept cargoes as their own storage is full.

German trade federation GD Holz said wholesalers had not at the time been significantly affected. How long this would last depended on continuing construction activity. However, for small to medium sized timber enterprises the situation was described as ‘catastrophic’. It was suggested that, to provide some relief, they might adopt the strategy of the electronics sector, allowing consumers to pre-order and pick up goods. Many German retail and other consumer-facing businesses were at a full stop, but DIY outlets were allowed to open in some parts of the country and hardware stores continued to serve B2B customers.

An earlier report on the Fair&Precious (F&P) website stated that Netherlands importers had sufficient stocks for the short term and ports and road transport had been designated key sectors and continued to operate.  The Netherlands Timber Trade Association also reported the DIY sector continuing to trade well. Overall timber trade sales, however, are expected to be down through the summer. The NTTA also told the STTC Newsletter that as of April 15, the Dutch building sector was still working subject to health and safety restrictions. However the number of construction projects was decreasing, with forecasts of a 50% fall in new home building. At the same time, activity in the renovation sector has reduced by 80%. The pandemic was disrupting timber supplies to the Netherlands from the rest of Europe and Malaysia and, while imports from Africa were ‘reasonably normal’, they were also expected to decrease. Plywood and other panel products were in increasingly short supply.

French trade body Le Commerce du Bois said the picture was mixed in France. Merchants were impacted first as construction and manufacturing customers shut down, importers followed. Subsequently, however, most merchants are reported to have reopened with much reduced personnel. Timber end user industries and importers largely remained closed.

The situation in Spain was described by trade association AEIM as disastrous. Members had postponed contracts and shipments, with construction and other customer sectors in shutdown. Some suppliers to parts of the joinery sector, however, were still active. And according to the F&P Covid-19 report, wood was still coming into ports as normal, although there were ‘difficulties for companies withdrawing goods’.

The latest Market Report from the International Tropical Timber Organisation includes a supplier country survey showing widespread disruption of the tropical wood sector by Covid-19. The industry was being affeced by both national measures to curb spread of disease and a drop in export demand. At the time of the report, Ghana was not in total lockdown, but regional controls were impacting timber businesses. Mills in Cameroon were not operating. In Malaysia movement control orders had resulted in a ‘drastic slowdown’ in forestry and timber sectors, while 76% of respondents to a timber business survey by Vietnamese trade body Viforest said they had suffered ‘pandemic damage’.  In Indonesia fall-off in demand had led to 280,000 furniture industry job losses.

According to a 15 April report from the China Timber and Wood Product Distribuion Association (CTWPDA), Chinese timber imports are set to decline 10-20% due to contraction in export demand. Already some imported material destined for re-export as finished wood products has been diverted to domestic consumption. However, the latter has also been hit by the pandemic, particularly in the ‘homes and living sector’. The CTWPDA reported disruption in timber supply from a range of sources, but said that the country had sufficient imported material to last two months.

The Fair&Precious website has a special report giving further information on the effects of the Covid-19 pandemic on the timber sectors of Europe, Africa and China.

As is the case in many regions where tropical timber is produced, Northern Congo lacks coordinated and federal support. In the fight against COVID-19, forest company INTERHOLCO is currently fundraising to buy essential, life-saving medical equipment to upgrade the capacity of the hospital that the company manages. This is located in the remote village of Ngombé (in the heart of the forest, as shown here on Google), where employees live with their families forming a community of 10.000 people, 1.000 km away from the capital Brazzaville. To learn more and to support – every bit matters! – see INTERHOLCO’s fundraising campaign here, and for regular updates follow the company on Linked-In or check out their news page.
https://www.europeansttc.com/wp-content/uploads/2020/04/3.-Covid-19-protection.-Photo-Michael-Gubi-1000x250-1.jpg 250 1000 Joyce Penninkhof https://www.europeansttc.com/wp-content/uploads/2016/01/logo_STTC_277_156.jpg Joyce Penninkhof2020-04-28 17:06:032020-05-01 10:50:55Covid-19 crisis has multiple timber trade impacts 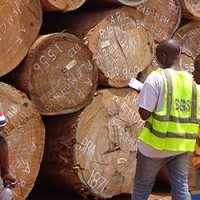