Lobbying against a proposal for Indonesia to abandon obligatory legality assurance licensing for timber exports is increasing in intensity. Pressure is growing both inside and outside the country for the move, which was conceived  by the Indonesian Ministry of Trade, to be abandoned.

Under the Ministry of Trade ruling, due to be implemented on May 27, timber exporters would no longer have to provide SVLK legality assurance documentation with export shipments, although could continue to do so if foreign customers require them. As things currently stand, Indonesian exporters are obliged to provide such documentation in the form of V-legal licences to non-EU export customers, and FLEGT Licences to those in the EU.

As the EU requires Indonesian imports to be backed by FLEGT Licences, they will continue to be supplied. The concern, however, is that abandoning the obligation on companies to provide V-Legal documentation to exports elsewhere could still impact Indonesia’s FLEGT Voluntary Partnership Agreement with the EU, as it requires that an equal standard of legality assurance is applied to all exports.

The Indonesian Ministry of Trade said its proposed change to the rules was part of a Covid-19 pandemic trade stimulation package. However, NGOs and trade media maintain that long-term lobbying by furniture and craft trade association HIMKI for the legality assurance obligation to be lifted is also involved.

Latest news at the time of publication was that the Indonesian Minister of Environment and Forestry Siti Nurbaya Bakar had sent a letter to the president, copying all other related ministers. She strongly defended the current Indonesian SVLK timber legality assurance system and urged others in government to follow the spirit of the presidential regulation that ratified the FLEGT VPA in 2014. She also asked permission for related ministries to engage formally with the EU to find a solution.

The STTC and European woodworking industries federation CEI-Bois have both written to the Indonesian embassy to Brussels urging his government to maintain timber legality assurance standards. Similar letters have also been sent to their respective embassies by eight national EU timber trade federations, plus trade bodies in Australia and the USA.

Some leading European importers have also already said they will reconsider buying from Indonesia if the new Ministry of Trade regulation goes through. One described it as a ‘watering down of Indonesia’s commitment to combat illegal timber’.

In his letter to the Indonesian embassy to the UK, David Hopkins, Chief Executive of the UK Timber Trade Federation, wrote: “The TTF is a strong ally of Indonesian timber trade and we do hope this will continue, but the UK trade will need reassurance that the robust SVLK measures you currently have in place will be upheld.” 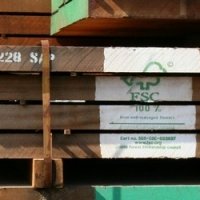